Fusion tables are an experimental offering from Google for use in Data Management.  It allows you to gather, visualise & share data 1.

For this assignment, we were asked to use Fusion Charts to create a Heat Map of the Republic of Ireland taking the 2011 census data.

So, how do we go about this task?

First we have to find the data.  The population data came from the Central Statistics office website here.  This I saved as a comma delimited CSV file.

The Irish KMZ Datafile which gave the borders for each county came from http://www.independent.ie/editorial/test/map_lead.kml.

I loaded both files into Google Drive.  And cleaned up any anomalies in the data which weren’t helpful in this case.  For example, We were only interested in Dublin county as a whole, not each council area.  In addition, Galway City & County would not match to Galway on the KML file.  We were only interested in the entire County Galway population.  Another I didn’t spot until I’d created my Geographic map was Tipperary.  Tipperary North & South were on the CSV file, but Tipperary the entire county boundary were in the KML file.  This meant I had a clear area for the whole of Tipperary.  Once I merged the two Tipperary figures, I then filled in the gap in the image.

Anyway, once you’re happy with the data, you need to merge the tables.  To do this, open one of the spreadsheets.  Then click File>Merge…, this will open up another window where you can choose the name of the other table you want to merge.  Then choose how you want to merge the data, in our case Name field from the map_lead table, and the County field in the County Population table.  You’ll then have a merge table, which I’d advise to rename to something more appropriate.

I then made the map Public on the internet. This allowed me to publish the map on this blog.

All of which leaves you with this:

The map dramatically shows the distribution of the Republic around the big cities – Dublin, Cork, Limerick & Galway.  There are whole swathes of Connaught and Border areas which are under populated as a result.  Even without knowing anything about the country’s infrastructure, you could surmise that most of the jobs are in these areas. 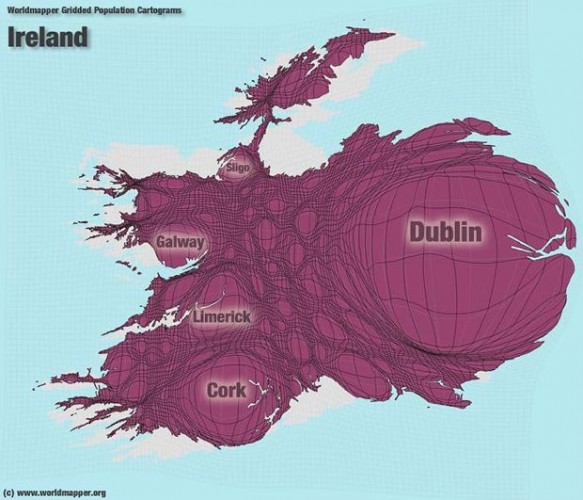 So, how could we make the map more useful?  What could we add?

It’s apparent that the majority of the motorways start in Dublin and are spread out the main cities like the spokes of a bicycle wheel.  Limerick – Cork or Galway don’t have motorways the whole way.  Going from Galway to anywhere north of the Galway-Dublin line is also not on motorways.  Maybe if the infrastructure for industry to get in and out of Sligo or Leitrim, for example, we wouldn’t have population black spots there.

What percentage of each county is unemployed?  Or has suffered the most from emigration?  If there is 5% unemployment in Dublin, say.  While we could say 25% in Leitrim, for our argument.  Using these figures, Enterprise Ireland or IDA Ireland could prioritise those areas with the worst employment figures for future employment opportunity.

Fusion Maps is a really easy product to use.  There is no need to know anything about mapping tools to use it.  It’s part of the Google suite of applications, and if you’re already working with those tools, it’s handy to take data you’ve already stored on Google Drive and work with it.

However, I’m not a fan for one reason: there are so many better applications out there at the moment.

What I mean by that is, it’s neither as fun, interactive or useful for routes as say Google Earth & Google Maps 4, at one end of the user spectrum.  Nor is it capable of handling sizable data, i.e. it currently has a size limit of 250MB per table, 1GB total.  It can only handle more that 350,000 features on a map (https://support.google.com/fusiontables/answer/1656859?hl=en ).  Which means it’s out for big data, or any serious data analysis.  Students studying for a PhD in Science, for example, would often have more than that, never mind industry.

In my personal opinion, even publishing your map onto another webpage, or even WordPress blog (!) is more difficult than QGIS, which is Open Source.

To be fair to Google, it is documented as an ‘Experimental’ application.  So, maybe it’s the starting point to something that will eventually take on ArcGIS, QGIS, or many of the other mapping applications, open source or not  3.  Not forgetting the functionality currently available in Excel, e.g. Pivot tables, charts, etc.

It’ll be interesting to see where they go with it into the future.